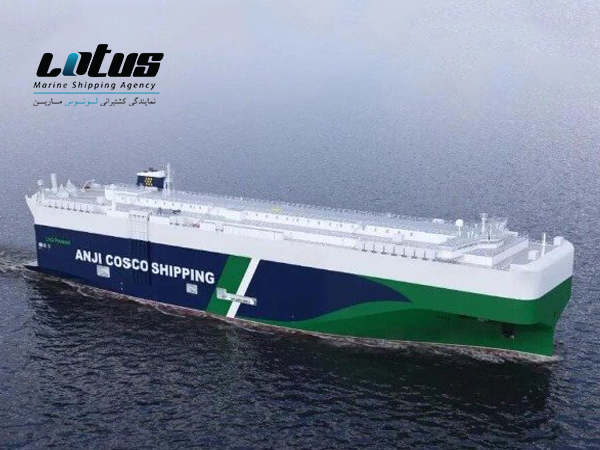 China State Shipbuilding Corporation received an order to build two of the world’s largest dual-fuel car carriers. Designed and developed by the Shanghai Ship Research and Design Institute, they report that the vessels will be versatile, incorporating new technologies and designs to maximize efficiency and meet future environmental considerations.

The two vessels, which will each be 131,000 dwt, will be built at Jiangnan Shipbuilding for Anji Logistics, a subsidiary of China’s SAIC Group. Each of the vessels, which will have a capacity for 7,600 cars, will measure 656 feet in length with a 125-foot beam.

According to the shipyard, they are the largest dual-fuel car carriers yet built. The propulsion adopts dual-fuel low-speed engines with fixed-pitch propellers. The ships will use LNG as their main fuel but they also provided for traditional MGO and low-sulfur HFO to provide fuel flexibility in the design. They report that the vessels meet the requirements for the 2025 Ship Energy Efficiency Design Index (EEDI) Phase III and will have significantly lower CO2 emissions than other ships of the type. They are also equipped with WinGD’s ICER technology to further improve fuel efficiency, reducing methane slip.

Operational efficiency will also be achieved through the design with a single screw, single rudder, and stern-type loading. It is designed for an operating speed of 19 knots while also providing low fuel consumption. Each vessel will have one C-type LNG tank with a capacity of 4000 cubic meters, which CSSC says can meet the needs of 19,000 nautical miles of economical speed sailing.

Other advantages of the design are reported to make the vessels suitable for a broad type of current and future vehicle designs, including battery and hybrid electric vehicles, as well as fuel cell electric and alternative fuel vehicles. The ships will have 13 vehicle decks and four movable decks in a continuous design. Loading and unloading efficiency is created by the use of long, straight ramps.

Höegh Autoliners massive Autoliner series, introduced in 2015 and 2016 remains the largest overall vehicle carriers. Each vessel has a capacity of 8,500 vehicles.