Devastating Explosion At The Port Of Beirut In Lebanon 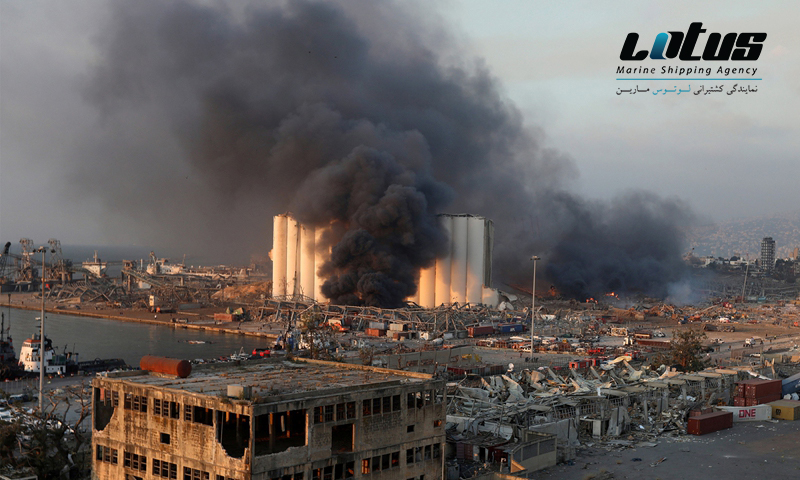 ast year’s devastating explosion at the port of Beirut in Lebanon on August 4, 2020 has added to industry concerns over the storage of hazardous goods and concentrations of risk at ports.

The explosion caused wide-scale damage to the docks and surrounding city, killing around 200 people and was caused by the detonation of an estimated 2,750 tons of ammonium nitrate – the largest single recorded explosion ever to occur in the region and one of the largest worldwide. The World Bank estimated the damage caused to be in the range of $3.8bn to $4.6bn, with economic losses adding a further $2.9bn to $3.5bn. Insured losses are estimated to be around $1.5bn.

This incident follows the fire and explosion at the Chinese port of Tianjin in 2015, caused by the spontaneous ignition of nitrocellulose at a warehouse storing other hazardous and flammable materials, including ammonium nitrate (which is typically used to make fertilizers and explosives). The resulting insured damage cost $2.5bn to $3.5bn, one of the largest man-made insurance losses in modern times. Similarly, in 2013, a fatal explosion ripped through an ammonium nitrate storage facility in Texas, killing 15 people.

The Beirut port and Tianjin explosions raise questions about risk controls for the storage of hazardous chemicals – such as ammonium nitrate – as well as the potential for very large accumulations of risks at ports and surrounding areas. Ammonium nitrate is a widely used chemical and can be found in ports and warehouses across the world. However, it should be stored away from combustible materials or other sensitizers and away from populated areas or critical services.

The explosions also highlight the concentrations of risk in the world’s largest ports. Beirut port, for example, is a major gateway to the Middle East, processing around 68% of Lebanon’s total external trade. According to the Russell Group [5], the EU had the highest port exposure in Q4, 2020, with $509bn in trade flow, followed by the US with $262bn and China with $176bn.

“The Beirut port explosion has thrown light on an issue that is known, but where the impact is underestimated,” says Captain Rahul Khanna, Global Head of Marine Risk Consulting at AGCS. “Ammonium nitrate is a widely used product, so the fact that it caused devastation on that scale should remind us all that an everyday product has the potential to cause such damage. It is clear that higher standards of cargo storage are key,” says Khanna.

“Along with the Tianjin incident, the Beirut port explosion also shows that this type of exposure in a busy port can have huge consequences, financially and for trade. And for insurers, this represents a massive accumulation of risk, which requires modeling. A similar event in a busy US or European port could be catastrophic.”

Vulnerabilities In The Supply Chain